The difference between code-switching and translanguaging as sociolinguistic phenomena

I’ve blogged about this elsewhere on this blog, but will summarize this distinction here with a few clear examples. Code-switching is a perceived shift in code that signals a “gear-switch” or change in addressee (person you’re speaking to), topic, tone, phase in the conversation, etc. We can think of examples from our personal experience. When I was in graduate school, I (and my friends Koyuki and Shuyu) went every Sunday afternoon to do writers group at my friend Yuhan’s. Yuhan and her Canadian-born husband Dan are from Taiwan. Whenever they addressed each other regarding an aspect of hosting (e.g., check the ice machine), they would use Mandarin. Shifting into Mandarin signalled to us guests/friends that whatever they were saying did not concern us, whether or not we spoke Mandarin ourselves.

Code-switching is a pragmatic phenomenon; it organizes social interaction. Is it political? Sometimes, if more privileged codes are used for the “official” teaching/learning and less privileged ones are used in the classroom underlife. Critical applied linguists who research code-switching in the classroom have illustrated how this happens (Asker & Martin-Jones, 2013; Martin-Jones & Saxena, 1996). Others have researched how code-switching can be a useful scaffolding tool to explain information, because the perceived contrast between two codes can separate two sets of instructions (both relevant for academic learning); see Jacobson and Faltis (1990).

Sociolinguistically speaking, translanguaging integrates codes to create the whole message. Any distinctions between codes would be meaningless. Below is an example from the research of well-known translanguaging scholars Creese and Blackledge (2011, pp. 11-12). In the following example, the principal of a Gujarati heritage language school in the U.K. is giving announcements during an assembly: 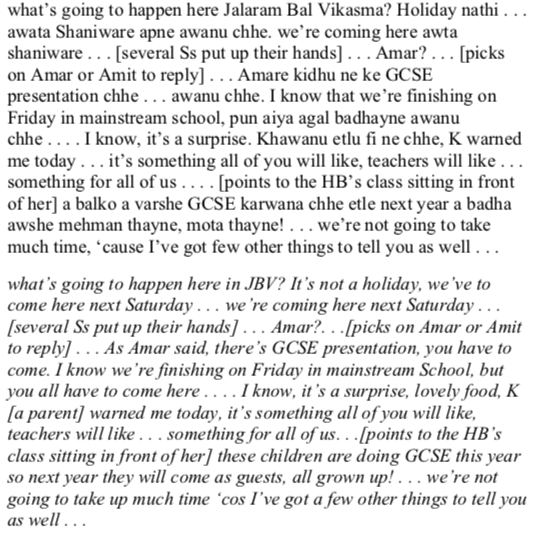 They tabulate what was said in Gujarati and English:

…and conclude that both languages are needed simultaneously to convey information; the message meaning is not clear without both languages. In other words, each language does not have separate functions, unlike in the example with Yuhan, Dan, and the ice machine above. In this school, children and parents have varying proficiencies in each language, and the principal’s use of both includes everyone to some degree. Overall, this choice is meant “to include as many of the audience as possible” (p. 13) (even though some would be more included comprehension-wise if one language were used, and others would be more included comprehension-wise if the other language were used). I think what “inclusion” means here is that both languages are valued and so is everyone’s repertoire, regardless of your proficiency in each.

How are translanguaging and code-switching understood as classroom phenomena?

My colleagues Shakina Rajendram, Andrew Coombs and I developed a survey of these practices that we presented at the American Association of Applied Linguistics (AAAL) conference in March 2022, the time this blog post was written. Shakina is a translanguaging researcher and Assistant Professor at the Ontario Institute for Studies in Education, University of Toronto; Andrew is a postdoctoral scholar and educational assessment specialist at Memorial University in St. Johns, Newfoundland. The purpose of the survey is to operationalize constructs clearly when we talk about translanguaging pedagogy in classrooms, and to give teachers an overview of the full range of such practices when they take the survey. Now I’ll share with you a few of the slides I presented about our research.

The first issue is TL purposes. What learning aims are we seeking to achieve through TL pedagogy? When we TL in English-medium instruction (EMI), whether that’s an EFL or ESL context (in EFL contexts, it’s generally called Content Language Integrated Learning in Europe or EMI in Asia; in the ESL context of the U.S., it’s called “sheltered instruction”—a subject area course like English Language Arts 9 or Geography 8 taught in English with only ELL-designated students enrolled), there are two main aims: content learning aims and language learning aims specific to an academic discipline. This is captured by the first two constructs above: bi-directional content transfer and genre awareness. People who have done work here include Jim Cummins (almost his whole body of work, especially the Common Underlying Proficiency, which suggests that a foundation in academic literacies underlies all the languages a student speaks, and so knowledge of academic language/literacy in one language helps to develop language/literacy knowledge in another; see Baker & Hornberger, 2001, for an introductory reader to Cummins’ writings). A textbook we use to train MEd CLIL teachers at the University of Hong Kong is Lin (2016), in the references list of the post.

Metalinguistic awareness is similar to genre awareness, but the language points to be learned/discussed through TL are not discipline-specific but regarding the grammar of languages, and so more suitable for language classrooms rather than subject content classrooms in a language such as English. This is often the case where multiple languages are taught at the same time with the aim of building bi/multilingual proficiency. This is associated with the work of Jasone Cenoz and Durk Gorter, who have pioneered how to develop general language and literacy skills simultaneously across a regional/minority/indigenous language, a national language, and global English (e.g., Cenoz, Leonet, & Gorter, 2021; Leonet, Cenoz, & Gorter, 2020).

None of this is inherently linked to critical pedagogy yet: raising awareness about language issues, language ideologies, and language inequalities in society. That is the work of people like Christine Hélot, Diane Dagenais, and others (e.g., Dagenais, Moore, Sabatier, Lamarre, & Armand; Hélot & Young, 2002). This work doesn’t happen in a vacuum: usually, what happens is that teachers prompt students to examine languages in the linguistic landscape of the school or neighbourhood, or in their online communities, to see what ideologies and inequalities can be documented.

We now come to translanguaging processes.

Does the teacher lead students to learn across languages to build proficiency in weaker languages, called “pedagogical translanguaging” (Cenoz & Gorter, 2020), as was envisioned in the earliest work using the term translanguaging/trawsieithu by Cen Williams (Williams, 1996)? Or does it mean letting students use languages freely in class, like they would do outside of class, mirroring authentic languaging practices in society, as in the well-known work of Ofelia García (García, 2009), which is known as “dynamic translanguaging” and is associated with a dynamic current of bi/multilingual practices called la corriente/the current (Johnson, García, & Seltzer, 2019)? I outline the differences between these two types of TL in this other blog post.

Now we come to the classroom language policy. Some people conceptualize translanguaging as just between the national languages (e.g., French-English in Canada, Cantonese-English in Hong Kong, etc.). This can be pedagogically useful (because these are the languages all class members tend to share to some degree), but also problematic, because other aspects of students’ bi/multilingualism, such as proficiency in immigrant/regional/indigenous/tribal languages, is not recognized at all. For example, Shakina and I have a colleague named Pramod Sah who noticed that in Nepali EMI classrooms, students and teacher used Nepali-English TL to teach and learn, but not Gurung, Limbu, etc. (Sah & Li, 2020). In contrast, work by García’s former student Heather Woodley and by my colleague Elaine Allard has investigated how teachers and students can draw on all language resources they bring to teach and learn (Allard, Apt, & Sacks, 2019; Woodley & Brown, 2016). And our colleague Ingrid Beiler has examined the ideologies that prevent this more inclusive form of TL from happening (Beiler, 2021).

Finally, we come to the issue of what happens if there is a formal assessment in the target language only. This is where translanguaging meets task-based language teaching (Seals, Newton, Ash, & Nguyen, 2020).

We hope that this taxonomy of 10 terms divided between 4 categories/issues can clarify what is meant by “translanguaging” when we research it in bi/multilingual classrooms.

Creese, A., & Blackledge, A. (2011). Ideologies and interactions in multilingual education: What can an ecological approach tell us about bilingual pedagogy? In C. Hélot & M. Ó Laoire (Eds.), Language policy for the multilingual classroom: Pedagogy of the possible (pp. 3-21). Multilingual Matters.

Lin, A. (2016). Language across the curriculum & CLIL in English as an Additional Language (EAL) contexts: Theory and practice. Springer.

Assistant Professor in the Department of Linguistics, University of Illinois at Urbana-Champaign View more posts

4 thoughts on “Once again, what are “translanguaging” and “code-switching” (within and beyond the classroom)?”